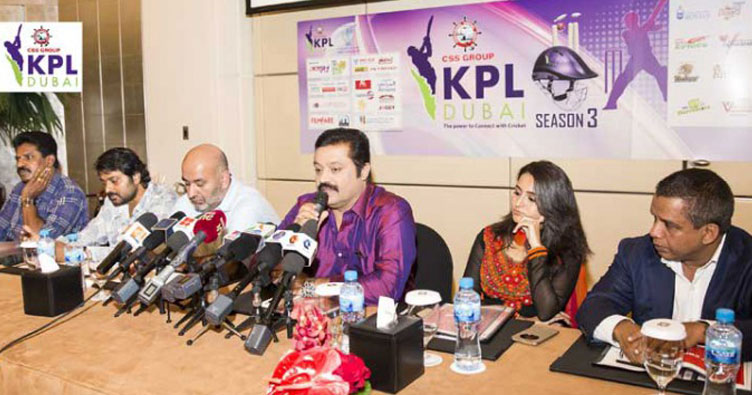 CSS Group KPL Dubai, the most acclaimed T20 Cricket in UAE is now entering season 3. We are pleased to announce the beginning of KPL Season 3 with the grand opening ceremony on 17th October 2014. The matches this year will be conducted simultaneously at 2 venues of the ICC grounds Dubai (Dubai sports city) till 21st November 2014. The final match will be played on 21/11/2014 which will be followed by grand closing ceremony.

CSS Group, a leading name in the field of freight forwarding & logistics are the Main title sponsors this year.

Renowned Music Band “Masala Coffee” will perform on the inaugural day after DJ Kips kicks off the evening programme at 5:00 PM.

The first of its kind T20 Cricket in UAE – Asian Cricketing with Middle Eastern seasoning!

A total of 12 Glorious Teams named with 12 Districts from Kerala would be playing the tournament for the coveted KPL trophy. Each team consists of a minimum of 2 players preferable from the respective districts of Kerala in a playing XI and the remaining from local talent with one player under the age of 22 and maximum of 2 overseas players.

KPL Dubai is the biggest ASIAN sporting event of the region and it gives you the opportunity to be known to and reach, one of the largest communities in the region.
After the super hit Indian Premier League and in consideration of the 4.5 million Asian populations in the UAE – the highest number among all expats, Kerala Premier League Dubai was formed under the guidance and support from the Dubai Cricket Council, and the generous patronage from the sponsors and the cricket loving community in Dubai. KPL successfully completed 2 seasons of cricketing festival in Dubai and is now entering the third season with a bang.

KPL Dubai offers the richest prize money in this segment of cricket. Lots of surprising gifts await the spectators as well.

We look forward to have your patronage for making this event a grand success.

Celebrities who will be present to cheer up the matches would be: