Malik, who first smashed 41 runs to help Idukki post a competitive 139 for seven in 20 overs, later picked up three wickets for 20 runs from his four overs and played a crucial role in bowling out Alleppey for 105 in 19.3 overs.Idukki, who were sent into bat first, lost their opener NadeemAslam for one, but his partner Udawatte chipped in with a 15-ball 29 with the help of two fours and three sixes.Though Idukki kept on losing wickets, Malik added a 32-ball 41, studded with four boundaries and one six, while Vikrant Shetty remained not out on 21 from 23 deliveries. Pakistan all-rounder Tanvir fell after making 10 from 16 balls with one boundary.

Shanil was the other unbeaten batsman with an eight-ball 11, including one hit over the fence.Mukhtar Ahmed made an impression in bowling when he took three for 25 from his four overs, while Habib Ghazi picked up two for 21 from his four.Fayaz Ahmed and Irfan Haji bagged one wicket each.

Alleppy got off to a disastrous start while chasing as they lost four wikets for 19 runs. Tanvir gave a good start to Idukki when he sent back opener Babar Malik for a duck, while RiazAfridi dismissed Mukthar Ahmed and Nigel cheaply. Afridi finished with impressive figures of three for 14 from his four overs, while Tanvir took two for 12 from his 3.3 overs. IshruUdana was also impressive when he took two wickets for 14 from his full quota of overs.Malik, who earlier batted beautifully for Idukki, went on to bag three wickets and played a crucial role in Idukki’s victory. Only Habib Ghazi counterattacked with a brilliant 47 off 21 balls with the help of two fours and five sixes.

Meanwhile, in the 30th match in KPL, Kochi made a thrilling four-wicket victory over Kannur, thanks to an all-round display from NizelFernandes, who picked up two wickets and hit an unbeaten 55.Kannur, who elected to bat first after winning the toss, made a healthy 151 for eight in their allotted 20 overs. HafeezKaleem hit a 28-ball 38 with the help of seven fours and one six, while NaveedSaleem scored 37 from 15 balls with three fours and three sixes.Mohammad Shiraz picked up three wickets, while Fernandes finished with two for 21 from two overs.

Kochi were in a spot of bother when they were reduced to four for 30 at one stage but Fernandes and Krishna added some useful runs and helped Kochi register a thrilling victory.Fernades remained not out on 55 from 44 balls with the help of five boundaries while Krishna chipped in with a 31-ball 39 with four boundaries and one six.

Man of the Match : Shoiab Malik of Danube Idukki Spices 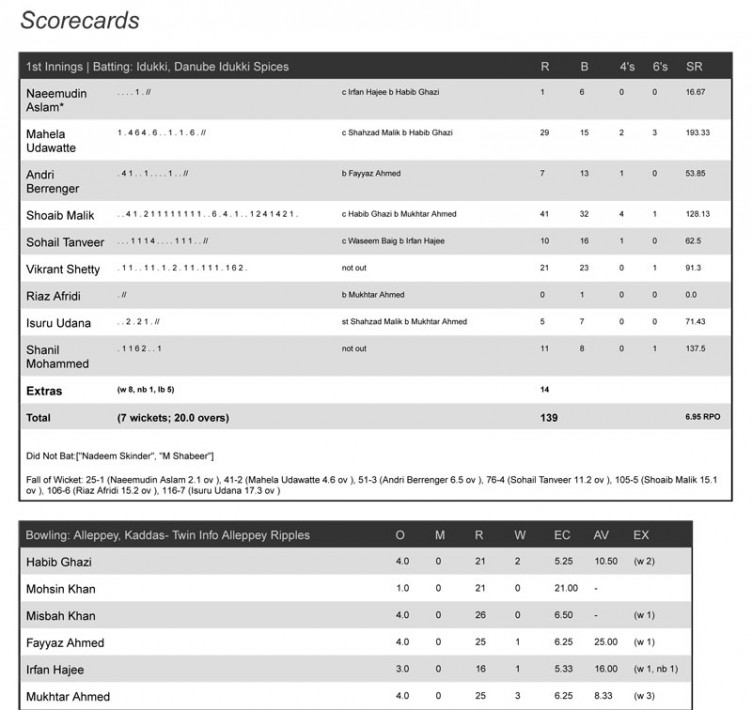 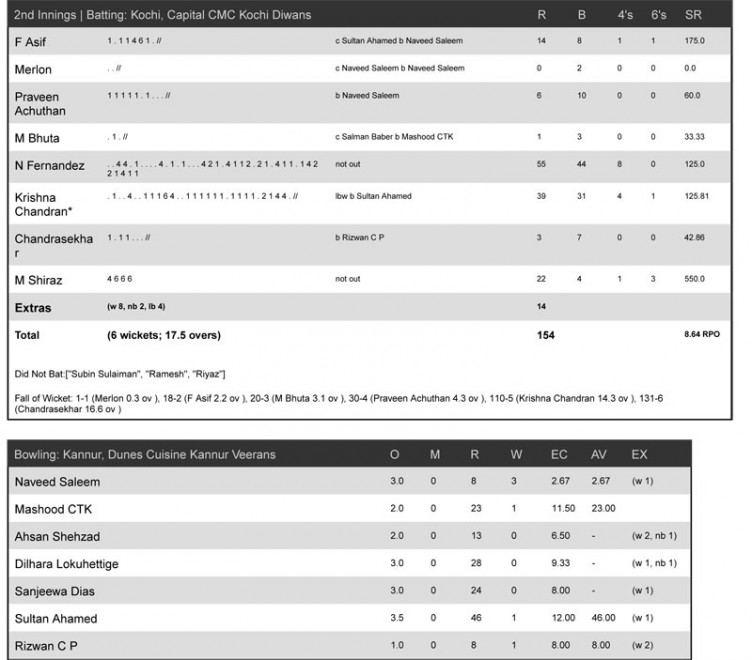