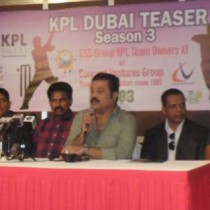 Dubai: The organisers Kerala Premier League (KPL), one of the highest profile UAE cricket tournaments, is hoping to extend the Indian Premier League (IPL) fervour here into the third edition of their event.
The KPL, which is held under the auspices of the Dubai Cricket Council (DCC), is the richest tournament in the UAE and is contested by top players representing Kerala’s 14 districts.
It will begin at the end of October, just a few months after the UAE hosts 20 IPL-7 matches, and Malayalam film superstar Suresh Gopi, who is the tournament’s brand ambassador, said: “We want the KPL to be held as an extension of the IPL excitement. With more people likely to be attracted to the game through the IPL, our tournament will be an opportunity for local cricketers and fans to savour the excitement of IPL-type cricket.”
Before the start of the KPL, the organisers will stage a match between KPL team owners XI and a side of Malayalam movie stars from 1983, a film based on India’s first World Cup win in that year. This Twenty20 match will be held on Friday at the Sevens Stadium on the Dubai-Al Ain road.
Announcing this match at a press conference at the India Club, Paul T. Joseph, the KPL director, said: “It will be a new chapter in the history of the KPL, which has grown in popularity over the years, clubbing cricketers and celebrities.”
Backed by Shridhar of Concord Ventures, the 1983 team will be made up of directors, actors and directors, while the owners’ team will be made up of Shiva Pagarani, Neeraj Ramamurthy and Biju Nair, who regularly play in top domestic tournaments.
One of the team owners and KPL director T.S. Kaladharan of CSS group is backing the owners’ team. On behalf of the 1983 movie, Nivin Pauly, Joju George and Abrind Shine were present.
Entrance will be free and top film actors Anoop Menon and Kunchacko Boban will be playing.
The sponsors are Space, Trotters, Petroteh, Nucaf, AAA, Flagship Emirates, Twin Infosolutions Private Ltd, Almarai and Hit 96.7.
GulfNews.com