Join us for an exclusive music event of Masala coffee on 17th October at 6pm the inaugural ceremony of KPL Dubai Season 3. 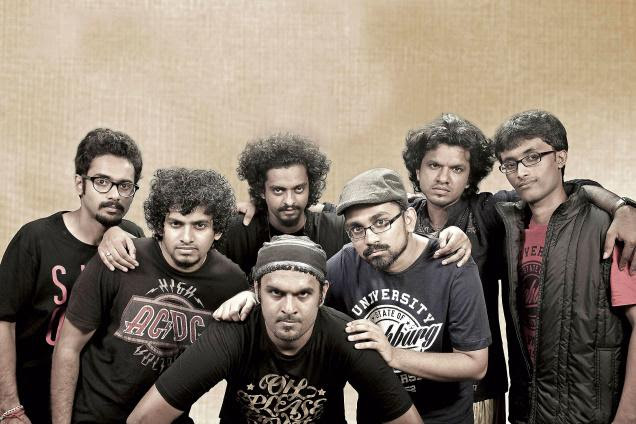 Some of their performances

Masala Coffee, the band brewed out of a relentless urge to create music beyond genres. So it made perfect sense that band went beyond geographies. Their sound herbs were picked up from across Mumbai, Delhi, Bangalore, Chennai, Kerala and you-name-it-where.

Within ten days of its release on YouTube, ‘Munbe Vaa…’ by ‘Masala Coffee’ has gone viral with more than a lakh hits. Comments range from “beautiful” to “awesome” to “just went back to heaven”…Sooraj Santosh’s soulful rendition, the original of which was composed by A.R. Rahman for ‘Sillunu Oru Kaadhal’, has people raving about Varun Sunil’s interpretation of the song.

Of the song he says, “I didn’t want to meddle with the song for the sake of it. Our aim is to make good music.”

Masala Coffee made its debut on Kappa TV’s Music Mojo a few months back. The channel recently uploaded all the songs by the band on YouTube.

Apart from ‘Munbe Vaa…’ the other covers are ‘Krishna Nee Begane’ (Colonial Cousins), ‘Kunnathoro Kaavundu’, ‘Mahi Ve’, a medley of Rahman songs and ‘Paani Da…’ The original numbers are ‘Karikkin Paattu’, ‘Naanam’ and ‘Once upon a time in Punjab’ – of which only the first two have been released.

The music defies labels – if one song is a rap-Indian classical jugalbandi then another is a Hindi song. About choosing ‘Krishna Nee Begane…’, the Colonial Cousins’ hit song, he says, “I have good equation with Hari-ji (Hariharan) with whom I have played, therefore it was inevitable.”

Coffee spiced is masala coffee, a mix of spice and coffee which makes a heady beverage. Similarly a desire to bring different, unexpected musical elements led him to putting together a band of eclectic sounds.

With Masala Coffee, the 27 year-old hopes to make music which melds different styles of music. “The band members span genres and the compositions have been so arranged that we explore at least some of these,” he adds, “the ‘esraj’ is an example of an instrument that is rarely heard in India, but it finds a place in the band.”

Most of these musicians are ‘Coke Studio’ musicians according to Varun, “they have played with various musicians on the show and are known names in the circuit. They are among the best in live music and they know their music. It was, however, a struggle getting everybody together to jam.”

The reason being that some of the musicians are based in Mumbai and are busy artistes in their own right. Varun made their acquaintance while working in Mumbai.

Varun has worked with various musicians such as Taufiq and Fazal Qureshi, Ranjit Barot, Astaad Deboo, Sadir Khan, Dilshad Khan, Hariharan, Swedish flautist and soprano saxophonist Anders Hagberg. He has also played for music directors such as Jerry Amaldev, Johnson, M. Jayachandran and Rajamani. Besides composing jingles for Cadbury’s, Sundrop oil, Castrol, Kurkure Monster Paws and Britannia besides a series of others.

The band is gearing up for concerts in India and abroad.

The band’s eclectic line-up is composed of —

Varun Sunil is a native of Cochin in Kerala. Right from a very young age he had a predilection to playing percussion instruments driving his folk’s crazy tapping out rhythm patterns on all kinds of surfaces including pots and pans and even his school desk. He picked up a pair of bongos when in junior school and then went on to learn the mridangam. After that it was experimenting on other percussion instruments bagging prizes at youth festivals while still in school. He started playing percussion for local bands in his town. After completing his formal education he did a course in Audio Engineering from Chetana school of Audio Recording arts in Trichur, Kerala.
He is based in Mumbai now and has been widely performing with musicians like Ustad Fazal Qureshi,Vikku Vinayakram,Hariharan,Ranjit Barot ,Stephen Devassy,Taufiq Qureshi,Sridhar Parthasarathy,Rizwan and Mauzam Fateh Ali Khan,Sabir Khan,Anders Hagberg(sweden) and many more..
Right now he is also a part of the play ‘’The Killing Of Dushasana’’,which is a blend of Flamingo music with kathakali as a multi percussionist and is playing along with two spanish guitarists and is sponsored by UNESCO. He is currently working on his solo percussion album too.–

He was the winner of Classical Music and Light Music at the Kerala State Youth Festival for two years in a row (2001–2002 and 2002–2003). He was also the winner at the 2004 School Youth Festival and 2004–2005 Kerala State Higher Secondary Youth Festival.He represented Kerala University in the South Zone Inter-University Youth Festival and was declared the winner three years in a row – 2009, 2010 and 2011. He has participated in the National Inter University Youth Festival. In 2009 he shifted his base from Trivandrum to Chennai.His first song ′Inka Etho′ composed by G.V Prakash for a Telugu thriller Darling won him the Mirchi Music Awards South conducted by Radio Mirchi for the Best Upcoming Singer in Telugu (2010). “A Special Program on the Mirchi Music Awards Hosted To felicitate all the Singers And musicians of South India”[9] Sooraj made his debut in Malayalam with the song ′Ee Ramayanakkootil′ in the film Second Show. Music composed was by Nikhil Rajan starring Dulquar Salman.[10] He also sang the song ′Iniyum Nin Mounamenthe′ for the film KQ for the music composition of Stephen Devassy. He has recorded for music director Ratheesh Vegha also for the movies Lokpal, Ladies & Gentleman and Uthup Kizhakkemala.

Suchith Suresan (born August 24, 1987)[2][3] is an Indian Playback singer who is a part of Tamil, Telugu, Malayalam and Kannada Industry. He made his debut with the song Pulayodu from Saadhu Mirandaal and hit to fame with Karigalan song Vettaikaaran composed by Vijay Antony.[4] Since then, he has lent his voice to a many films including Chikku Bukku[5] and Nanban.[6] His contributions to the soundtrack of Dam 999 earned him a nomination on the preliminary list for the 84th Academy Awards. (commonly referred to as Oscars).[7][8] Suchith sang the jingle for the Radio Mango 91.9 FM,composed by Deepak Dev which bagged the World Bronze Award(2009) for best station jingle at the New York Festivals.

Suchith has studied Carnatic and Hindustani music under gurus Sri. Aryanadu Raju and Sri. Ramesh Narayan (Music composer ) respectively[9] and is part of an Indie rock band, Udaan, as the lead vocalist.

A self-taught, yet thoroughly learned musician, Daniel Kenneth Rego joined Indian metal juggernauts Demonic Resurrection at just 18, touring across the country and lending his talents to the band’s watershed album, ‘The Return To Darkness’. On the heels of the new record, the band soon embarked on their first international performances at major music festivals in Norway, Czech Republic and more recently, the UK. Over the years, Daniel’s work profile has expanded to include performing and recording as a live and studio session musician in diverse styles and settings, composing and arranging for productions across multiple genres, as well as being a sought-after music teacher in his home city of Mumbai.

Was Working for Vijay Prakash in Bombay. He is From Trichur and very talented Piano player Who can Do magic. now a days he is very busy with movie industry Doing Back ground scoring and Programming.

A Perfect Drum machine who can play tight Groves and make us all mad and He plays with Slain , Swarathma, Manoj George (A great Violin Solo player ) and Suraj mani ( ex- motherjane)

I started off making music back @ Skool wen I hooked up with mas ckool frnds…..We formed a live four piece band, I was the singer n ma frnd played keys and we wrote most of the songs together. Fortunately there are no known surviving copies of the tunes we made!!!!! After a couple of years I went off 2 listenin music thru clubs…n started fiddilin aro..popular dj’s…. den he passed away….deni quit djingcme dwn2..E.M.P-amruth helped ma lot@S.A.E..international clge…I got right on board and started to make mad breakbeat tunes. I didn’t really attend my diploma eng classes much over three years. I knew it was just a way to delay getting a real gud marks.. “Interest for structures irrepressibly shifted from engineering to music”…..while I decided what I wanted to do in life. It was only in the last few months of the final year of ma xams that it dawned on me……..shit……Final Exams…..Argggghhhhhhh!!!!! ……… “The Marketing of a Nocturnal Vibe Productions…..”…s abo 2 ReleasE..